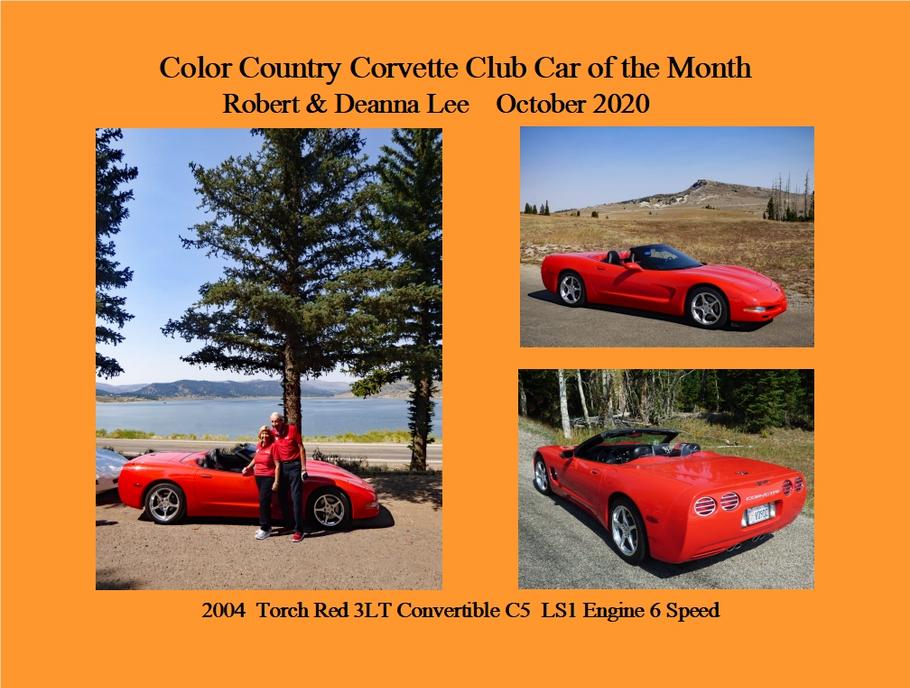 CAR OF THE MONTH

​"Late one Sunday night in February, I spotted a nice looking Corvette on KSL.  Showing a picture of it to my half asleep wife and making comment that it was a nice looking car, she rolled over and said "Well, why don't you buy it?"  Monday morning she went to work and I went and bought the Corvette.  It is the last of the C-5's , a 2004 3LT convertible in Torch Red with an LS1 engine and a 6 speed.  I hid it in the garage.  When she came home from work (normally coming in  the front door) for no special reason that day walked in from the garage.  Her opening statement was "What's that in the garage?"  We had a red Chevy Cruise at that time so I just said "That's the Cruise".  She said "I know a Corvette when I see one!!!" and added "Is this some kind of joke?"  I told her it was not a joke and that her name was on the registration too.  We have been enjoying the car ever since.  Being a member of the Color Country Corvette Club continues to be an enjoyable experience and we've met a great bunch of people."    ​

​​ Our club was founded by Doug and Anne Rosa in 2006 for Corvette owners that have the common interest of enjoying and driving what we consider to be the ultimate American sports-muscle car icon.

Our club functions include day and weekend cruises, breakfast, lunch and club dinners, car shows, charity events and above all FUN.

Prospective members are welcome and encouraged to attend a club meeting and event.  However, to become a club member you must own a Corvette.

Color Country Corvettes is a non-profit organization and does not condone drinking and driving.

All of us here at Color Country Corvettes would like to say thank you to Stephen Wade Chevrolet staff for their help and sponsorship.